Is Nail Polish Safe During Pregnancy? Here’s What You Need To Know

Most likely, the answer is, “eventually, you will not.”

All joking aside, there’s so much information (too much, in fact) about what you can and can’t eat/do/breathe, during pregnancy, that it’s normal to wonder if anything is safe during pregnancy.

Is Nail Polish Safe During Pregnancy?

As is the case with so many pregnancy-related things, the answer to the question,”is nail polish safe during pregnancy?”, is maybe, maybe not.

Unfortunately, it’s hard to study the effects of anything on a fetus because there’s no way to conduct a safe study. Much of the conclusions we have about pregnancy and safety is based on anecdotal evidence, which is helpful, but not always definitive.

That said some studies have attempted to find a link between any cosmetic use (nail polish included) and problems during pregnancy. In general, these studies find that normal exposure to cosmetics is safe during pregnancy. 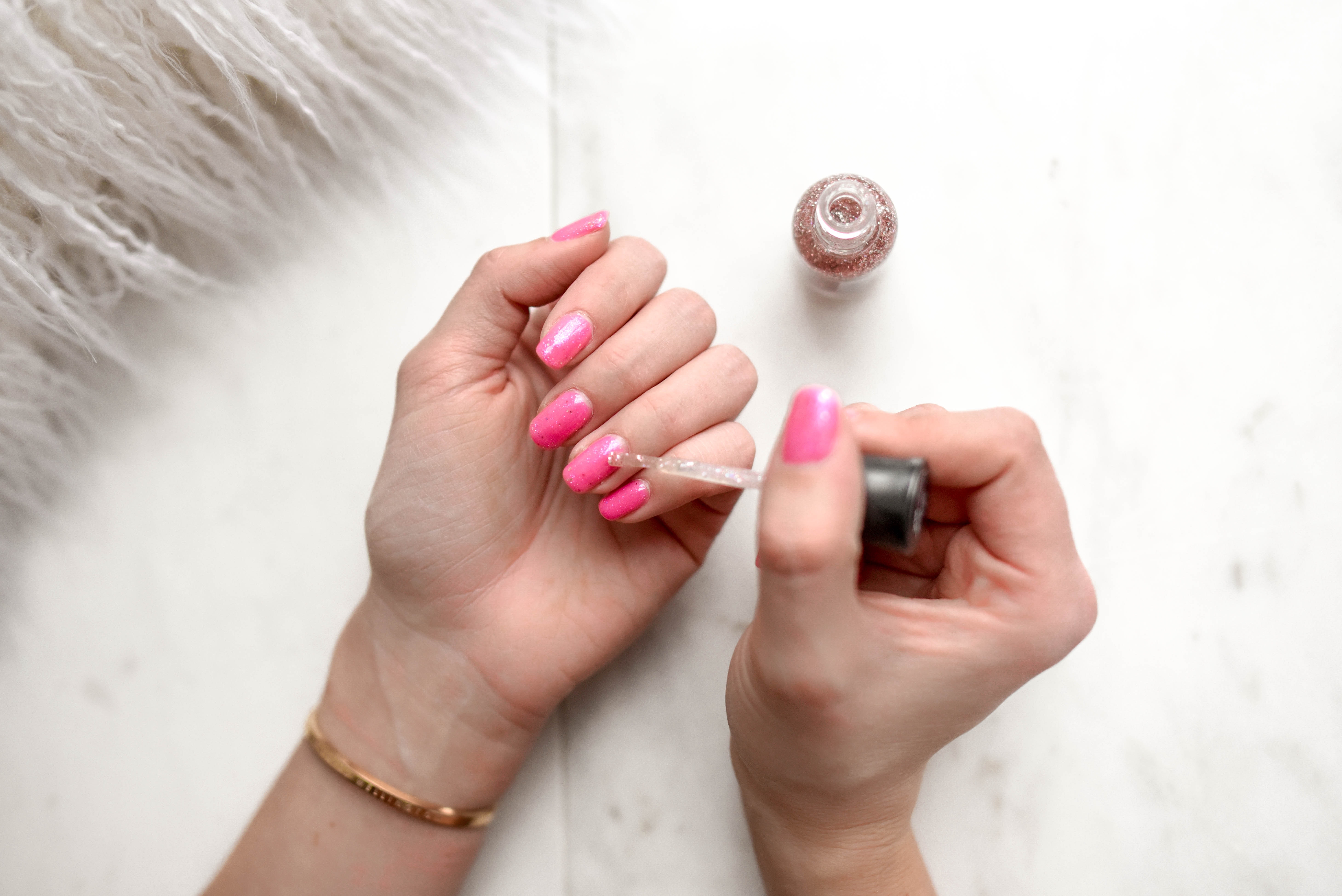 Photo by Element5 Digital from Pexels

applying, it needs to be two things.

First, nail polish needs to be strong. Strong nail polish resists chipping and peeling (because there’s nothing worse than a manicure that looks terrible after a week). And, of course, nail polish also needs to stick to nails. However, it also needs to come off your nails when you want. Nail polish manufacturers create nail polishes that meet these goals by using several chemical ingredients. 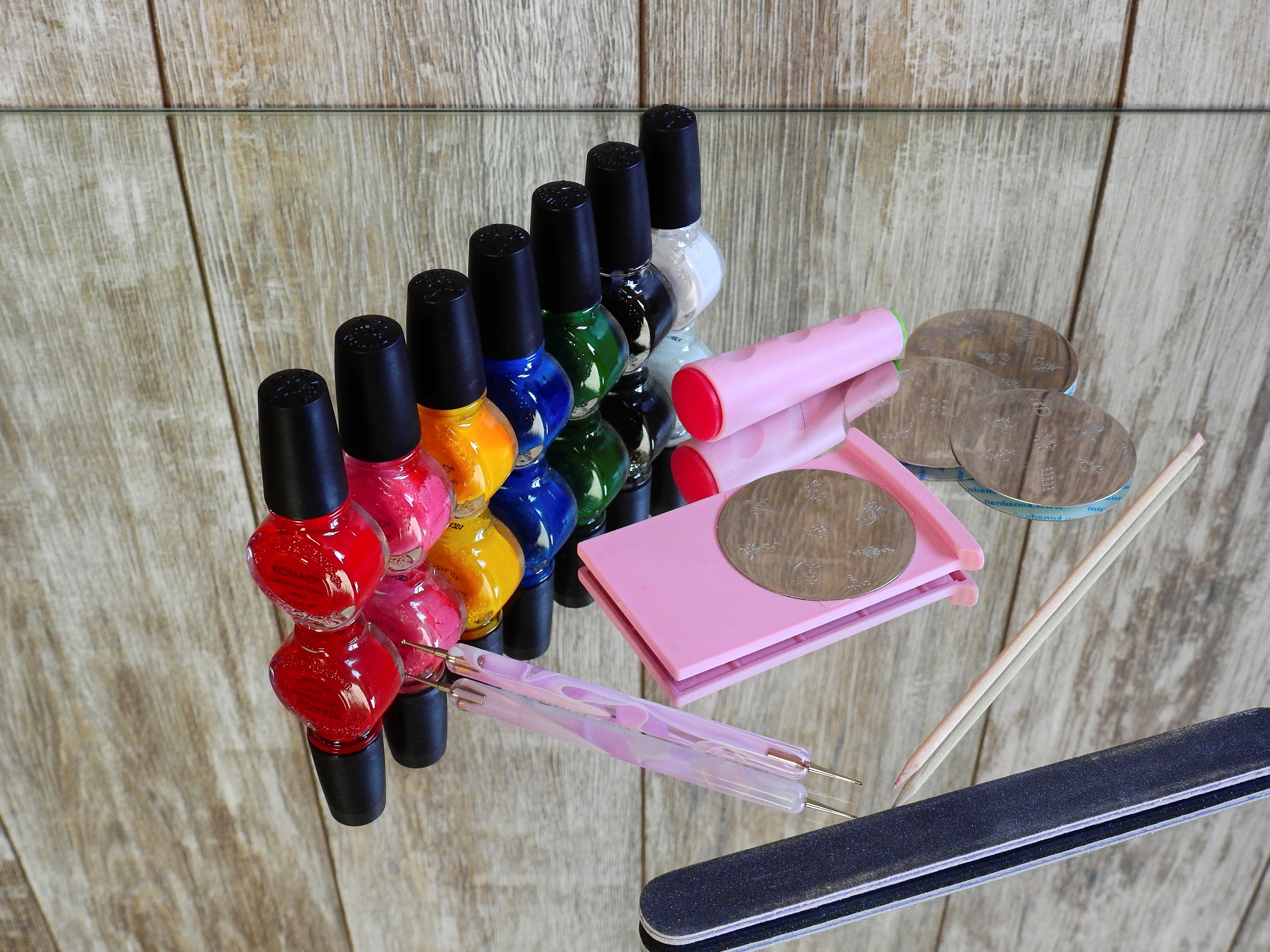 Almost all nail polishes consist of two chemical ingredients: a polymer and a solvent. The polymer is dissolved in the solvent. Depending on the type of nail polish you’re applying, there may be other things in there, too, like pigment for color or glitter for sparkle.

Nail polish solvents can be made from many different chemicals, including alcohol, butyl acetate, or xylene. The solvent uniformly mixes the other ingredients in the nail polish together, so you have a nice, even polish to apply (because who wants chunky nail polish?).

The most common polymer is nitrocellulose, which is liquid mixed with cotton fibers. Nitrocellulose creates a film over something that helps hold it together. 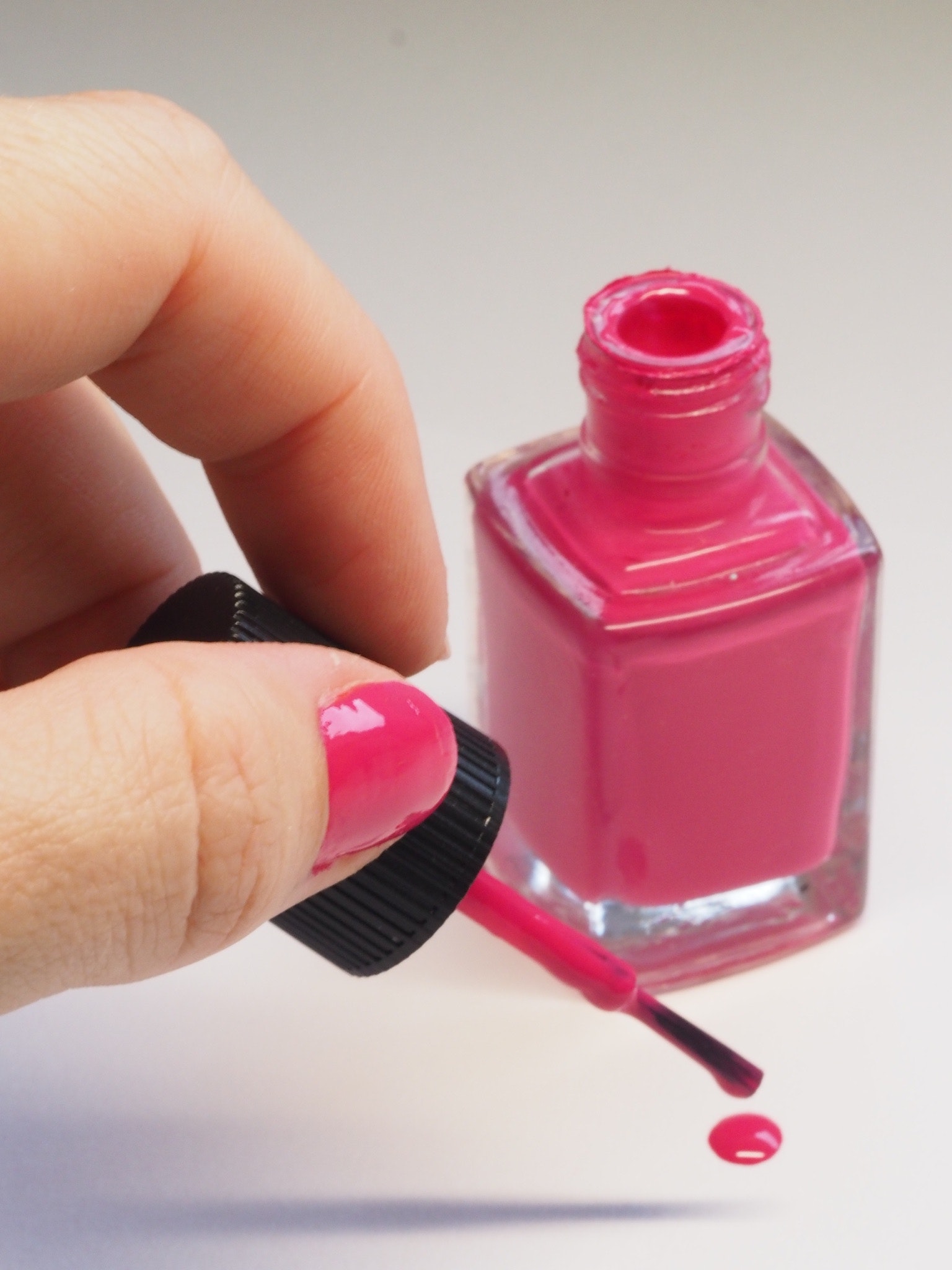 The Food and Drug Administration (FDA) regulates nail product safety, specifically through the Federal Food, Drug, and Cosmetic Act. Without getting into the law and science behind everything, by law, all nail products sold in the United States must be safe for consumer use.

That said, there are some nail polish ingredients that people consider the “toxic 3,” and should be avoided by everyone, not just by pregnant women.

Toluene used to be a common and popular solvent in nail polish. It’s also used in gasoline to improve the octane. While the FDA currently allows toluene in nail products, many manufacturers are phasing it out. That said, several studies have found that exposure to toluene from nail polish is generally not dangerous.

The odds are pretty good you are familiar with formaldehyde as a preservative. You may have even encountered some during a biology class and will never forget the smell. It’s also a known carcinogen. However, the risk of developing cancer from formaldehyde exposure is generally only for professions that work with formaldehyde regularly (like embalmers or veterinarians).

While the FDA allows the use of formaldehyde in nail polishes, some people may experience allergic reactions when exposed to it, specifically if the nail polish comes into contact with your skin. Formaldehyde may go by other names like formalin, methylene glycol, or toluene sulfonamide.

Dibutyl phthalate is a polymer that helps the nail polish stick to nails. Like toluene, the use of DBP is slowly being phased out. DBP may disrupt the endocrine system. However, a study conducted by the National Toxicology Program between 1998 and 2000, found that reproductive risk to exposure to phthalates (like DBP) is minimal to negligible.

What About the Smell?

Photo by Malcolm Garret from Pexels

In general, when asking is nail polish safe during pregnancy, we aren’t just asking about wearing nail polish. While you can absorb some of the chemicals through your nail beds, the bigger exposure risk comes through breathing the fumes

While I generally do my nails at home, occasionally, I’ll treat myself to a real mani-pedi at the salon. And, I’ve noticed that the nail tech always wears a mask. Not only do they wear a mask, but the salon doors stay wide open (even in winter), and there’s usually a lot of fans and ventilation running.

That’s because the nail tech is repeatedly exposed to many chemicals that can affect their health. Opening the windows, ventilating the salon, and wearing masks all help mitigate those effects.

That said, unless you’re going for a weekly manicure, your risk of exposure is small because you’re not breathing in those chemicals all day every day. To be safe, though, choose a well-ventilated salon. If it makes you feel better, wear a mask during your service.

Also, ask the tech to skip the cuticle cutting and ask for them to be pushed back instead. It lessens your risk of germs or chemicals getting in the nail bed. And, skip the UV lights for drying. Yes, you’ll have to wait a little longer to leave, but there’s no need to expose yourself to the extra UV while pregnant.

Lastly, if you aren’t sure about the ingredients in the salon’s nail polish (or can’t read the tiny ingredient list), bring your own. And, that includes a base coat, a top coat, or anything else you want to apply to your nails.

Photo by freestocks.org from Pexels

While that (sort of) answers the question is nail polish safe during pregnancy, you still might have questions. Most nail buffs (pun intended) know that “manicure” doesn’t mean one thing. “Manicure” can mean anything from a basic polish manicure to a reverse French manicure.

In general, when we look at what kind of nail polish is safe during pregnancy, we’re talking about “regular” nail polish. That means nail polish that doesn’t require much more than a base and top coat.

But, just like manicures, there’s more than one kind of nail polish. And, while most of those nail polishes all have the same formulation (solvent plus polymer) there are two types of nail polishes you should pay special attention to when you are pregnant.

Is nail polish safe during pregnancy if I use gel polish?

In general, gel nail polishes are safe during pregnancy. However, there are a few important safety precautions.

One of the main ingredients in gel polish is methacrylate monomers, specifically methyl methacrylate monomer (MMA). Back in the 1970s, the FDA received complaints about MMA, specifically, that it caused fingernail damage and contact dermatitis (rashes). The FDA removed MMA from the market. However, there is no recommendation against the use of MMA in cosmetics, including nail products.

As a result, MMA is sometimes still found in nail products (like gel polish and acrylic nails). While the FDA says to avoid direct skin contact with a product containing MMA, you should avoid it whether you’re pregnant or not. If you’re head to the salon for a gel manicure, you should consider bringing your own gel nail polish, just in case.

Is nail polish safe during pregnancy if I use dips? 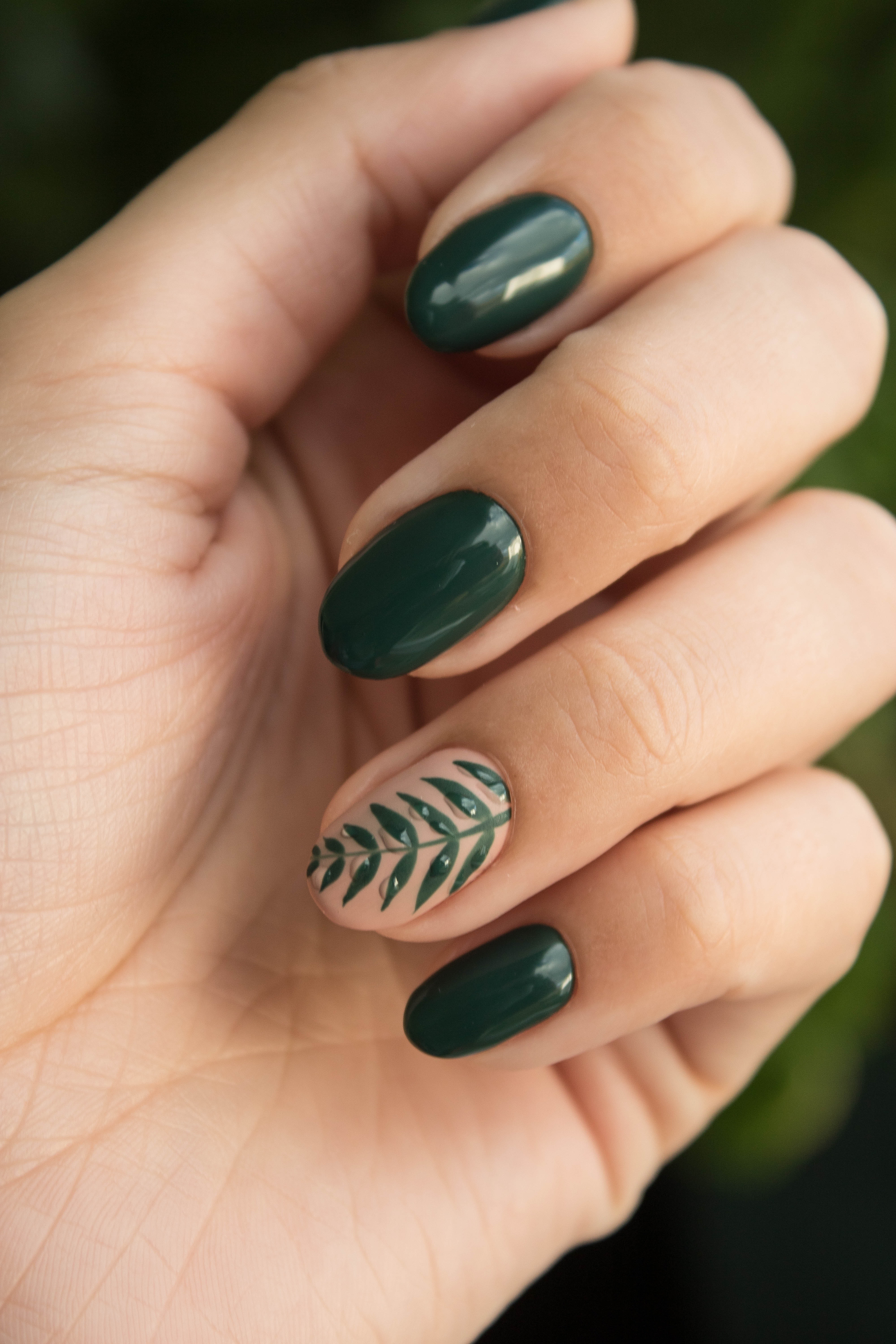 Photo by Kristina Paukshtite from Pexels

I cannot give yourself a decent manicure. Personally, I tend to get the color all over my skin. If you are like me, you might want to consider dips.

Dips are new to me, and I like the idea. First, you apply a clear base coat. Then you dip your nails into some colored powder. Repeat until you like the intensity then add a glossy top coat.

But, with all that powder, you’re probably wondering about dust inhalation and if it’s safe for pregnant women.

So, Is Nail Polish Safe During Pregnancy?

It is if you know what to avoid.

Whether you do it at home or the salon, you really should take some time to pamper yourself while you’re pregnant. You’re doing a lot of hard work being pregnant. And, take my word for it, you won’t have many chances to spoil yourself after the baby is born.

And, since we now know that the answer is yes to the “is nail polish safe during pregnancy” question, there’s nothing stopping you from a little self-care. Except, maybe, that bump in your middle.

Are you pampering yourself during your pregnancy? Let us know how in the comment section below!