When do Babies Crawl Being an important part of an infant’s development, crawling is the middle phase succeeding rolling and preceding walking where the baby gets into motion thereby preparing himself to be on his feet and explore the world. The baby begins to crawl when there is proper coordination between his hands and legs, with his motor movements being much improved and balanced than before. 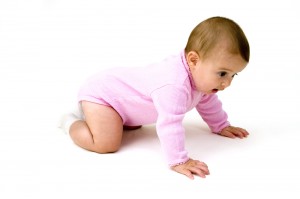 At what age do babies start crawling

Once the baby can roll over conveniently in both directions, his muscular movement gradually strengthens. By the eighth month, he begins to sit without support thus resulting in an increased flexibility of his leg, arm and back muscles that get strong enough to bear his body weight as he gets set for crawling. The baby initially begins balancing himself on his hands and knees, then going on to move around with the combined coordination of both[1].

The average age when most babies should start crawling is between the eighth and tenth months, though some of them may even crawl by the time they reach their first birthday [3]. If your baby is a late crawler, there is nothing to worry about, provided he is active and healthy.

A few babies, having an advanced motor development, display this skill as early as at five months of age.

Belly Crawling: Some begin crawling by resting their stomachs on the floor and dragging along with one leg, keeping the other one straight. Children starting to move on their belly crawl earlier than those who make perfect usage of their hands and knees as this kind of crawling do not require much body balance or support. Also known as commando or army crawling it is a common way of movement for infants with cerebral palsy [4, 7].

Backward crawling: When first starting to get acquainted with this skill, your baby may amuse you by crawling or scooting backward instead of moving front. Forward crawling begins once he gathers strength in his legs [10].

Crab Crawling: The baby moves backward or sideways like a crab, pushing himself with his hands [6].

Bear Crawling: In this style the baby walks on all fours (arms and legs) without bending them [4].

Leapfrog crawling: The baby displays a frog-like posture by forming a bridge with the help of his hands and legs, then moving forward just like a frog [6].

Classic Crawling or Cross crawling: This is the traditional type of crawl where the infant moves forward by drawing out their arms in combination with the opposite knee [1, 6].

Do all babies crawl

Though crawling is a significant milestone, all children do not show this development. Some of them may skip this stage, directly going on to scoot about, stand and finally walk [1].

Studies show that after the American Academy of Pediatrics began alerting parents to make their babies sleep on their back to avoid SIDS (Sudden Infant Death Syndrome), the rate of infant mortality reduced. However, this has resulted in lessened physical movement [2].

In fact, by sleeping on their back, children get lesser time to spend on their stomach that is partially responsible for their lack of or delayed crawling [2].

How to teach or help a baby to crawl

Increase tummy time: A good way to get your baby to crawl is by letting him spend more time on his tummy when he is awake. Spending ample time on the stomach  facilitates in strengthening the muscles of his back, head and legs, helping him to crawl efficiently. Moreover, increased tummy time also prevents the development of a flat spot on his head which occurs due to lying on the back for a longer time [1,5].

Placing toys near him: An interesting tactic to encourage your baby to crawl forward is by placing some of his favorite toys at a distance. The baby will make every attempt to grab at his favorite belonging thus bringing his knees and arms to advance [1, 5]. You may also try something creative like a crawling tunnel or a tent to make this entire exercise interesting and fun-filled.

Place obstacles on his path: You can place some pillows, cushions or boxes in your baby’s path, encouraging him to overcome the barriers. However, be near to your baby as he may panic on getting stuck in between the boxes or any other objects. The idea of using obstacles have also been suggested by the American Academy of Pediatrics to facilitate smooth crawling as well as increasing the baby’s confidence and flexibility [1].

The mirror trick: Another creative way to help a baby learn to crawl is by placing a mirror at a close distance from them. Being fascinated to see their replica right in front of them, they will attempt to get on their fours and go near the mirror to have a closer view of their reflection.

Give him positive vibes: After completing a day’s crawling lesson appreciate your child’s effort by being affectionate towards him or even giving him some reward.

Provide a flat surface: To make your baby crawl around smoothly provide a carpet or colorful crawling mats. You may even place certain bright, colorful toys on the mat or hang them above to make the baby flex his muscles in order to reach out to them [8].

Do not force: Only make your baby crawl after he has reached seven or eight months of age and is sitting up comfortably as well as showing flexible arm and head movements. Doing anything forcibly may have an adverse effect on your baby, even hampering his development.

The baby’s crawling skill will not affect his future motor skills as an early crawler is not always an early walker, whereas babies crawling late or not doing it at all may get on their feet earlier [9].

Sleep regression is a common phenomenon that will be seen in your crawling baby. In fact, your kid remains so preoccupied with this newfound skill, that he shows unwillingness in sleeping. Parents should allow the child to be excited about his new skill rather than getting frustrated every time the baby crawls or tries standing up in his cradle [9].

However, if your little one shows delay in other motor developments or is unable to move both sides of his body in a flexible way, then bring it to the notice of your pediatrician.